Groceries for the Queen 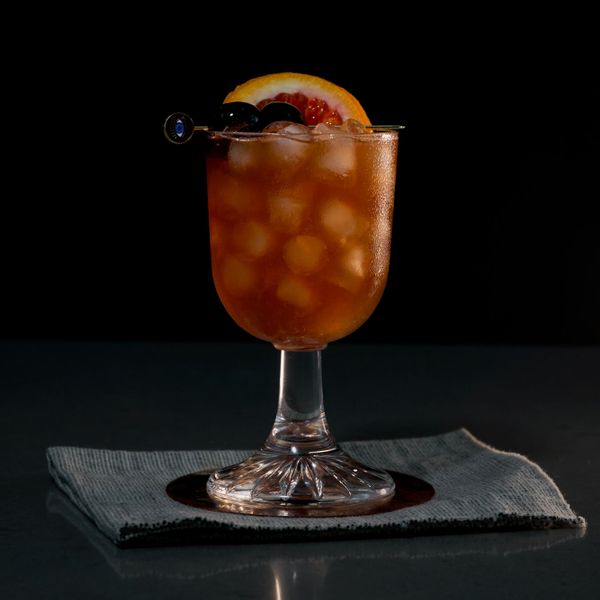 When afforded the opportunity to use Amaro Montenegro, we rarely pass up the occasion. Such was the case while flipping through the pages of Sother Teague’s I’m Just Here for the Drinks and stumbling upon this beauty. The author, and amaro expert behind New York’s Amor y Amargo, Teague named the concoction in reference to the pairing of Montenegro with Cherry Heering. Confused? We can elaborate: Peter Heering, responsible for the world’s first cherry liqueur, was a Danish grocer (this is the groceries part), while Amaro Montenegro was named in honor of the marriage of Princess Elena of Montenegro to Prince Vittorio Emmanuele III, the future king of Italy (hence the queen bit). These two historic ingredients combine to produce a drink that is excellently suited as an introduction to amari. It is rich, juicy, and mildly bitter with a profile that appeals to any palate.

Montenegro is a favorite among bartenders and for good reason: it is deliciously complex and only mildly bitter, which lends itself excellently to mixing. Only three individuals know the exact formula for Amaro Montenegro, which is made from a blend of 40 botanicals, including sweet and bitter orange, and nutmeg, cinnamon and clove. The resulting flavor is full of citrus, warm baking spice, and cocoa. Fruit and chocolate is a classic combination, so pairing it with Heering feels like a natural choice. Cherry and orange scent dominate the nose, with medicinal undertones from the amaro. More orange and cherry lead through the sip, followed by mild bitterness and complexity from the gin. The Heering is very prominent, resulting in something that tastes a like grown-up fruit punch. A light bodied gin will let the Montenegro shine, while the addition of chocolate bitters underscores the warm flavors from the Montenegro. The drink’s dark complexity and combination of heering, gin, and modifier reminds us most of the Remember the Maine, but it’s combination of amaro and tiki ingredients is not unlike another classic: the Jungle Bird.

The original version of this recipe—despite being a feature on Montenegro—was a little lacking on Montenegro for our tastes. We prefer it with an extra quarter ounce. As always, use fresh orange juice in your cocktails. The drink’s essential ingredients don’t leave much room for improvisation, however there are various chocolate, or similarly flavored, bitters on the market. We often use El Guapo Spiced Cocoa Tea Bitters when chocolate is called for.

And To All A Goodnight
bourbon, reposado tequila, heering