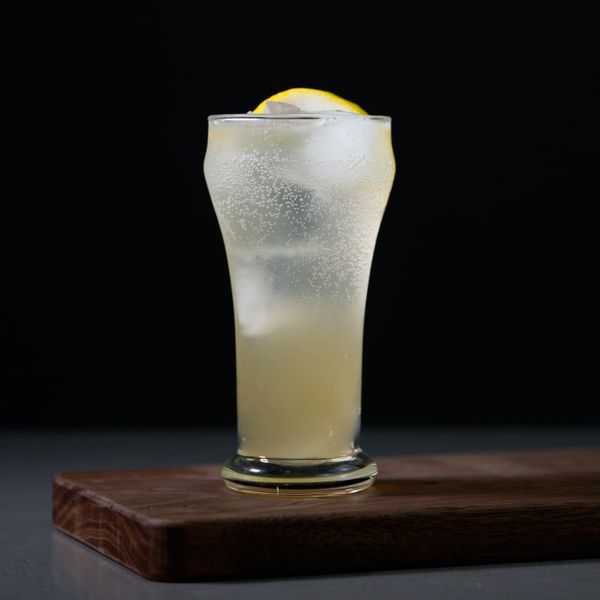 Many of us may envision the Tom Collins surrounded by bunny tails and shag carpeting, hobnobbing with the likes of the Pink Squirrel and Harvey Wallbanger, yet it isn’t an artifact of the 1970s but a popular drink among the fashionable set of a century earlier. The US was formally introduced to the recipe when Tom Collins Gin was published in Jerry Thomas’s 1876 The Bartender’s Guide. Much debate surrounds the name, as there are apparently several earlier references to a similar drink published under the name John Collins. According to drinks historian David Wondrich, this recipe likely dates back to the early 1800s, rooted in the gin punches served at London clubs and coffee houses of the era; more specifically, he links it to a particular gin punch resembling the recipe we know today, made by a John Collin at Limmer’s Hotel. In time, the drink made its way across the pond and, due to any number of possible explanations, the John Collins became Tom Collins.

This is a quintessential summer tippler: tall, spritzy, tart, and probably the lightest and most refreshing drink we’ve made. Composed of lemon, sugar, soda water and gin, it’s essentially the original hard lemonade, and is ideally suited for parties and limited home bars. It’s a good long sipper that stands up well to a large dose of ice, not unlike a good fizz or a swizzle. The Collins of the modern era is commonly made with London Dry gin and simple syrup, however various versions have called for Old Tom gin and oleo-saccharum: the citrusy syrup used in many old punches. If you’re interested in attempting this slightly more complicated method, look to NYC’s always excellent Dead Rabbit for an oleo-saccharum recipe. We chose to make the simplest of hybrids, borrowed from the pages of 3 Ingredient Cocktails.

The drink’s simple build provides an excellent template for flavor experimentation, so feel free to get creative and add a little something to accompany the season or occasion. We didn’t come away with a sense that Old Tom gin was essential here, like one would with the Martinez for example, and we could see it being equally enjoyable with a dry gin. Clearly, this is the time to reach for a Collins glass if you have one. Alternatively, simply choose a glass with a comparable capacity (roughly 10 to 12 US fl oz) to avoid thinning the flavor with an excess of soda. When it comes to technique, this drink is again flexible; it can be built over ice in the glass, stirred, then topped with bubbly water; or it can be shaken then poured over ice and finished with soda water to better blend the flavors.